France was counted among the nations with the most hostile attitude towards cryptocurrencies up till fairly recently. In fact, initially, crypto websites were blocked by the government. However, lately, the country is becoming more and more crypto-friendly. The formation of new crypto regulations has further added to this attitude.

The tax rate on crypto assets has been lowered from 45% to 19%. The new regulations tax investors as commercial and non-commercial, on the basis of the frequency of their investments. The French regulatory body, AMF, is responsible for publishing a whitelist consisting the names of enlisted ICOs, tokens, and exchanges. The launch of new ICOs requires ICO Visas and KYC. Also, the ICOs have to follow the guidelines set by new regulations while the framing of their whitepapers.

So to sum up, the French government has been taking a keen interest in this emerging technology. They have been striving to make France a crypto haven. Moreover, even though laws like the ban on advertising crypto-based products remain, France has made great strides in the field. 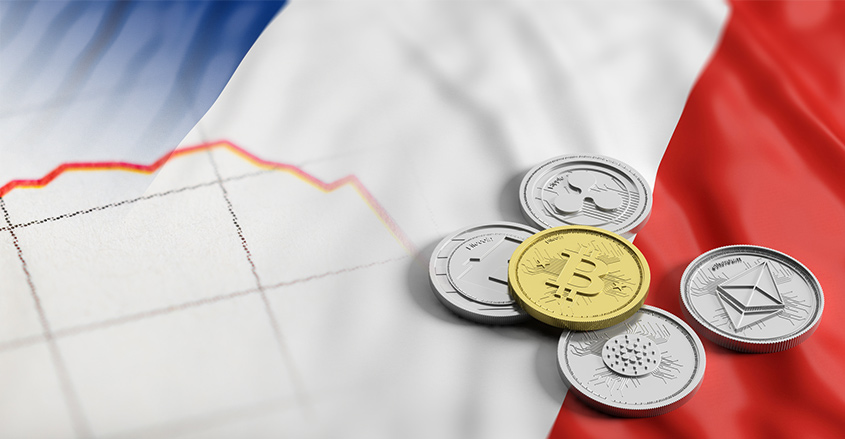 France counts among the top ten countries for ICOs. Cryptocurrency and blockchain technology represents a growing industry in France. As such, the number of exchanges operating in the country has also scaled up:

One of the largest Bitcoin exchanges in the United States, Coinbase Pro is also available in France. Coinbase Pro has the advantage of offering good prices at low fees. However, its complicated user interface could prove to be confusing to users.

Paymium is not only the first European Bitcoin exchange but also the most trusted one. Bitcoins can be purchased here through wire transfer, credit cards or SEPA. A mobile app for their services is also available.

Though Bitfinex accounts can be funded only by bank wires, the transfer fees this exchange charges is almost negligible. Originally based in Hong-Kong, Bitfinex is also available in France.

Bank deposits here can only be made in Japan. However, it supports deposits from European nations including France through bank wires, SWIFT and SEPA. It charges both, a low taker and low maker fees and is counted among the world’s most trusted exchanges.

One of the most popular exchanges in the world, Bitstamp is also available in France. It offers a wide range of deposit and withdrawal options and also charges a nominal exchange fee.

Based in Singapore, Luno is a fast expanding cryptocurrency exchange in Europe. It supports the purchase of Bitcoin through SEPA, SOFORT, iDeal and credit.

The French government has allowed FinTech companies to trade securities using the blockchain platform. As a result, different FinTech companies are experimenting with cryptos in the country. The best example is the Keplerk deal under which French tobacco shops are selling Bitcoin. Signing a partnership with Keplerk, a French cryptocurrency wallet provider, about 4000 tobacco shops are allowed to sell Bitcoins.

How Easy is Buying Cryptocurrency in France?

Buying cryptocurrency in France is relatively easy in the way that services of many exchanges are available in the country. However, the French government, in December last year, rejected crypto-friendly tax reforms. This means that taxes shall not be lowered for cryptocurrency traders and users. As such, crypto assets are taxed in France at 36.2 percent. This constitutes 19 percent income tax and 17.2 percent social contributions.

How Easy is it to Make Crypto Payments in France?

France is a country that has always been popular among tourists. In most of the boulevards and shops in Paris, payment in crypto is easily accepted. The country also has Bitcoin ATMs. Most recently, France’s Financia Business School has allowed students to pay their fees in cryptocurrencies. All of this points out in the direction of mass adoption of cryptocurrencies by the general population.

What are the Regulations on Cryptocurrencies as a Mode of Payment?

It is to be noted that despite all the irregularities, cryptocurrency adoption has witnessed a new push in France.