The “Bitcoin Revolution” popularized another term – blockchain. What was a source code for bitcoin, or the underlying technology that powered a novel peer-to-peer electronic payment system has now come of its own and has found applications in almost all aspects of human endeavor. So what is this blockchain technology and how does it work? Let us find out.

Where did the blockchain come from?

The blockchain is much older than we think. Popularized through the Bitcoin white paper, written by Satoshi Nakamoto, the blockchain is the result of many years of research in economics, computing and cryptography.

The blockchain promotes the idea of decentralization, which, not surprisingly, is opposed to centralization. Today, we live in a world where most of the things around us are centralized.

They are governed by companies, states, banks, etc. We may trust them, or not, but we cannot do without them. These things we trust are called trusted third parties. The blockchain, on the other hand, operates without central authority.

This was impossible before.

For example, if you send a file to a friend on the Internet, the file is duplicated. You have a copy of the file as does your friend; the file is not unique. The file does not start from point A to point B. It remains at point A and a copy appears at point B. So this kind of process cannot work for money.

When you give 1 euro to your baker to buy a bread stick, a copy of the coin does not stay in your pocket. The coin is not duplicated, it is unique, it leaves your wallet to go into the baker’s.

Thanks to Bitcoin, this is now possible. A functional, reliable and trust-free monetary system has emerged.

Definition of the blockchain

The blockchain can be compared to a large digital book running on a computer network. Data is then added to this ledger (the blockchain) in real time and is visible to all participants (in the case of a public blockchain).

When a transaction is made on the blockchain, it is added to a block. This block contains all transactions that have occurred in the last few minutes (the last ten for the Bitcoin network) and that have been shared with the entire computer network.

In the case of Bitcoin, (miner) participants compete to solve “cryptographic puzzles” in order to validate transactions. The first miner to solve the puzzle receives a reward for his work, which, let us not forget, makes it possible to secure and maintain the network. The puzzle is extremely difficult to solve and this difficulty increases over time. Thus, miners must use powerful computers to solve these calculations.

When Bitcoin was first launched, it was possible to mine using a simple laptop computer. This is no longer the case today, it is far from it. The difficulty of the puzzle is much higher than it was a few years ago.

Transaction validations correspond to an analysis of cryptographic movements and a time stamp of the different transactions within the blocks. This will then allow the newly validated blocks to be linked to old validated blocks. A chain of blocks is formed containing each transaction made on the blockchain.

This channel is updated and accessible to all network members. The resulting decentralization allows total transparency and immutability. Thus, everyone has the possibility to visualize the data available on the blockchain network.

Understand how a bitcoin transaction works on the blockchain 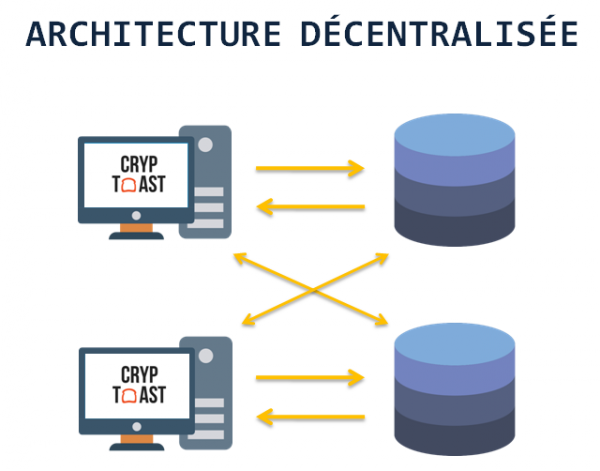 Here is a summary diagram explaining how a public blockchain works during a transaction. 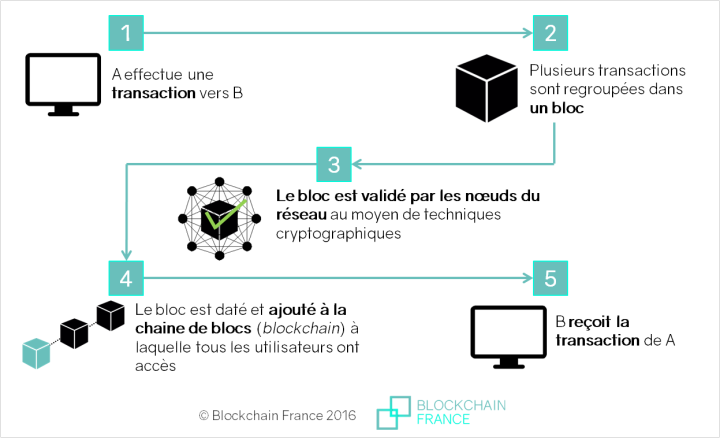 How does blockchain technology work?

Each person participating in the blockchain network has a copy of the database (containing transactions) and must keep it up to date.

In a public blockchain, all nodes have the same rights, this allows for better security and better transparency of the network. To corrupt the network, more than half of the network participants (nodes) would have to be “corrupted.” We call this a 51% attack.

Modifications of the blockchain are possible. Consensus must be reached, i.e. more than half of the nodes must agree. When consensus is reached, new data are added to the blockchain. Sometimes these consensuses generate forks, as was the case between ETH and ETC in the DAO case.

The blockchain data are included in hexadecimal hashes. This allows to include a large number of encrypted data in a format that always remains the same, with a specific length depending on the blockchains. The number of characters and the shape of the hashes are always the same unless a change is made. This contributes to the safety of the blockchain.

These hashes will allow you to sign the transactions. There are different methods for hashing transactions. In other words, to validate, register and secure them in the blockchain. The two most well-known methods are PoW (Proof-of-Work) used by Bitcoin and hash (Proof-of-Stake) used by Dash.

When Jean sends a transaction to Nico, he sends it to his public address. This public address (or public key) is linked to the private address (private key). To prove that Nico is the new owner of 2 Bitcoins, he will have to identify himself with his private key.

⚠ Your private key/address must always remain confidential, it should never be shared!

We have seen above that for some blockchains, which use PoW consensus such as Bitcoin, miners mine/make blocks. Several blocks are mined at the same time. Miners working on two competing blocks stop working from the moment the block is created. The following rule has been introduced: the valid branch is always the longest branch.

It should be noted that all public blockchains work with a token which is the equivalent of a programmable token.

What are the advantages of the blockchain?

Transparency in the use and allocation of funds

It is possible to track the use of funds by a company or association. In the case of donations, it would then be possible to see what uses are made of the donations.

With the arrival of Bitcoin, it is now possible to exchange value between two entities without going through banks or any other intermediary. This minimizes costs, risks of corruption and the obligation to trust a third party.

Some cryptocurrencies allow the use of smart contracts. The first cryptocurrency using smart-contracts is Ethereum. This allows certain actions to be triggered when a condition is met.

What are the limits of the blockchain?

You have to learn a new “language,” new ways of working, develop solutions, etc. that takes time and requires specific learning.

A network at risk of being overloaded

As seen at the end of 2017, the massive use of a blockchain can lead to network saturation. Indeed, in the case of Bitcoin, at the end of 2017, there were too many transactions to be processed within a reasonable time frame. Thus, the excessive number of transactions per second made it impossible to record all transactions in a single block every 10 minutes. Since then, solutions have been put in place to allow a greater scalability of the Bitcoin network with, for example, the development of SegWit.

Moreover, when a network is saturated, transaction costs generally increase very significantly. The more users pay, the faster their transactions are validated.

It is complicated to “scale-up” decentralized networks without compromising consensus (the transaction validation process necessary so that a single minor cannot process all transactions) and decentralization.

If an entity is able to own the majority of the network nodes, it can fully control a cryptocurrency. For example, it could choose to intentionally provoke a fork.

Blockchain technology may have its own set of challenges but they aren’t different from those faced by any new, innovative technology. The advantages of the blockchain technology outweighs its challenges. It is only a matter of time when more and more industries see its limitless potential and incorporate it to make processes more trustworthy, transparent and efficient.